Morris is known for his iconic images of reggae star Bob Marley, whom he met when Marley was playing at a club in London in 1974. Morris, who was still at school at the time, and despite his careers advisor’s advice that he should think about a ‘proper job’, was appointed official tour photographer and went on to make many, many great photographs of Marley.

After Marley’s death he spent a year documenting the chaotic and volatile British punk band, The Sex Pistols. The band imploded on the last gig of their U.S. tour in 1978 at the Winterland Ballroom in San Francisco. Morris’ photographic style is ‘Reportage’. Citing Don McCullin, Tim Page and Bob Capa as major influences, Morris created an outstanding body of work from the Punk Rock years.

After the Pistols split, singer John Lydon, Bassist Jah Wobble, and drummer Jim Walker, founded Public Image Ltd, or PiL, an experimental avant-garde post punk band.  The band’s logo was designed by Morris along with the Band’s second album, Metal Box. The album came in three 12 inch vinyl 45’s packaged in a metal 16mm film canister with the band’s logo embossed on the lid and is considered a design classic.

Punk Rock was a disruptive force on the popular music culture of the day.  Hated by some and misunderstood by others. Today Bitcoin is the Punk Rock of money. It is immensely disruptive and it’s decentralisation means it can’t be controlled. To quote Anton Antonopoulos , “Bitcoin is not just a minor incremental change, it’s not a payments network. Bitcoin is one of the most fundamental transformations on the basis of money,” Punk is not dead!

Full color decoration on front with a glossy finish

Steel safety pin on the back of the button

ALL OF OUR PINS ARE MADE IN THE USA! 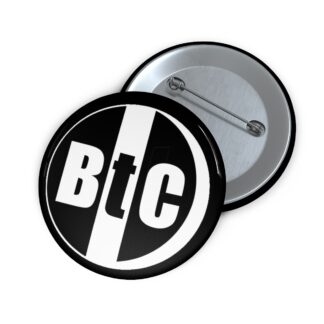