James ‘Satoshi’ Caan T-Shirt — A new Satoshi Nakamoto has emerged and of course he is claiming to be the inventor of Bitcoin. Bilal Khalid, who changed his name by deed poll to James Caan after watching the epic gangster movie, The Godfather, claims to have invented Bitcoin with the help of Chaldean numerology and Hal Finney.

Despite claiming to be the inventor of Bitcoin, Bilal seems to be rather inept with computer technology. He claims in 2011 that he lost his wallet.dat file and the 980,000 bitcoins therein when his laptop crashed. Apparently he took the broken machine to have its hard drive replaced and the repair guy threw away the old drive.

This new Satoshi Nakamoto, who apparently spent his wilderness years working for the NHS in the UK,  Is going to create a new Bitcoin. In his ‘My reveal‘ He talks of his “Tabula Rasa” (a blank slate) project. Many in the crypto world believe this ‘coming out’ is nothing more than publicity stunt to promote a new blockchain crypto project. I think so too.

However, my biggest gripe with this new pretender is not his outrageous claims, but the mug shot  that is now being displayed by google images when you search for Satoshi Nakamoto. It’s just not good for the optics! Which is the reason I created this T-Shirt featuring the great actor, James Caan, who played Sonny Corleone in the The Godfather. No way is Bilal Khalid going to be the face of the greatest invention in the history of humankind. Not on my watch! 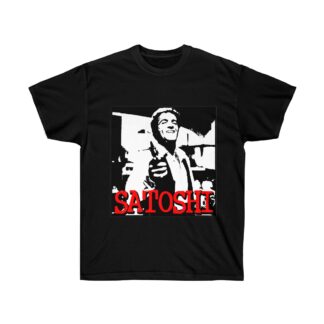