PUMP EET! Crypto Stickers.  Cool stickers featuring Grichka Bogdanoff. In the cryptoverse the Bogdanoff twins (Grichka, has a brother, Igor) became synonymous with bitcoin and big red candles. The French brothers came to fame decades ago in France as TV science fiction producers. in 2002, the twins became embroiled in what was dubbed, The Bogdanoff affair, regarding a series of papers they had written on Theoretical Physics.

As well as science they seem to have a love affair with plastic surgery. They have had many procedures over the years which have resulted in them taking a on a bizarre appearance. Crypto Twitter took the twins to their hearts during the volatile months through-out 2017, claiming the twins were directly responsible for the big price swings. Many of us would like to see the twins return. The current Bear market seems to be going on for ever and ever, and many of us would like to see the twins work their psychic magic on the Bitcoin and Altcoin market once again!  PUMP EET!
Features: 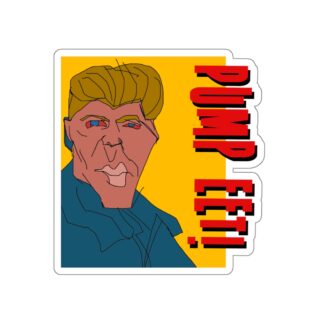